Abia State Government has released photos of the man who absconded from a holding facility in the state after testing positive for COVID-19.

Emmanuel Ononiwu escaped from a holding facility in Aba just before he was to be moved to an isolation centre. He switched off his phone afterwards and also his wife has remained unreachable despite calls for her to present herself for a test.

The Abia state government has now released photos of Ononiwu in a bid to recapture him and force him to go into isolation.

Sharing photos of the COVID-19 patient, the Abia state government wrote: “Wanted Person: Emmanuel Ononiwu. These are file pictures of Emmanuel Ononiwu who was declared wanted by Abia State Government after he tested positive to COVID-19 and absconded from a holding center in Aba prior to being moved into isolation.

“He is a generator mechanic, uses a Mercedes V-Boot car, previously used a Mercedes 190 brand and is believed to be from Ikeduru LGA of Imo State but resident in Aba.

“If seen, please call 0700 2242 362 and do not approach him physically without adequate protection to avoid being infected with COVID-19.

“All enforcement units at the borders and security checkpoints are hereby notified to be on the look out for him as there are indications he is planning to flee the state.” 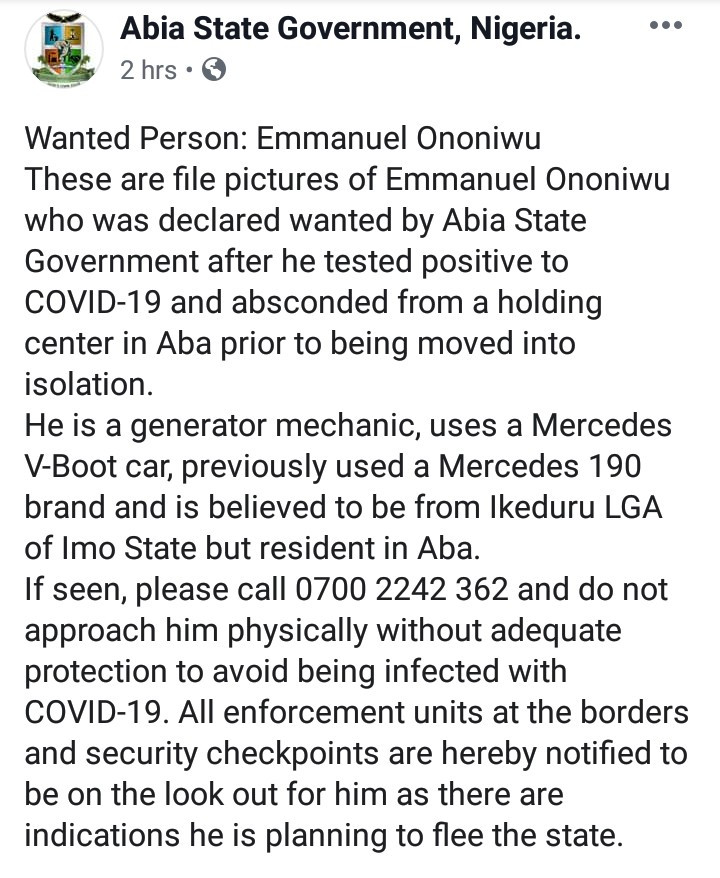 #EndSARS: We will never be silenced – Falz

Woman Accidentally Shot Dead By Her Toddler As Colleagues Watched On...

BOBOJAYTV - August 14, 2021 0
A 21-year-old mother was accidentally shot to death by her toddler who picked up a loaded gun. Shamaya Lynn, 21, from Florida, was taking part...