May 21, 2022
Oby Ezekwesili
Home Nigeria Blasphemy: Ezekwesili Pulls Out Of NBA Conference In Sokoto Over Gruesome Killing Of Deborah Samuel

A former minister of education and BBOG convener, Oby Ezekwesili has withdrawn from speaking at the conference of the Nigerian Bar Association (NBA) scheduled to hold in Sokoto.

Mrs Ezekwesili announced her withdrawal on Friday via Twitter, saying she would be boycotting the event in protest against the killing of a student Deborah Samuel in Sokoto for alleged blasphemy.

“I have decided to withdraw my Speaking commitment to @NigBarAssoc for its event holding in Sokoto. I was billed to speak from abroad via Zoom but even now will no longer do so,” the former presidential aspirant noted. 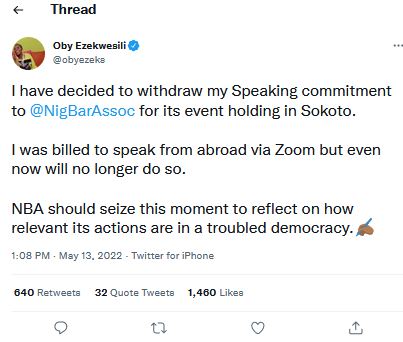 Ezekwesili, who was billed to speak during a session on ‘democratic evolution and nation-building, urged the NBA to use the moment to reflect on “how relevant its actions are in a troubled democracy.”

Those scheduled to speak in the session alongside Ezekwesili are INEC chairman Prof Mahmood Yakubu, Rivers State Governor and presidential aspirant Nyesom Wike among others.

Earlier, rights lawyer Ebun-Olu Adegboruwa called on the NBA to cancel the conference over the killing of Samuel.