According to exlusive investiations by SaharaReporters, a report by the Nigeria Police Force has exposed how Wema Bank Plc offered bribe to the police officer investigating the N1.7billion illegally moved to account number 0122367964 domiciled in the financial institution and operated by one Isaac Adewole, a pastor of the Redeemed Christian Church of God by top officials of the bank.

The report signed by the Commander of Area G, Lagos, ACP Ibrahim Zungura, said multiple fraudulent transactions were carried out through the account.

“The culpability of WEMA Bank officers was further confirmed when the officers tried to bribe investigating officers with large envelopes that contained money.

“The officers declined the bribes but the Bank persisted. The officials spent time begging and persuading the inestigating officers to drop the case. The Executive Director of the Bank, Mr Wole Akinleye, was also invited and he tried hard to derail and stop the investigation. He also wrote a letter to ask that he be exonerated from the case when it was clearly established that the bank could not explain the transactions, that the movement of funds was a form of stealing from the bank which is sometimes referred to as ‘pay off source’.

“This is shown by the facts that the funds deposited were not removed in that order or in the sums deposited but carefully removed in different tranches as it is shown on the account statements. For his own part, Mr Adewole refused to cooperate with he investigations but instead did everything he could to assist the bank in covering up,” the report exclusively obtained by SaharaReporters read. 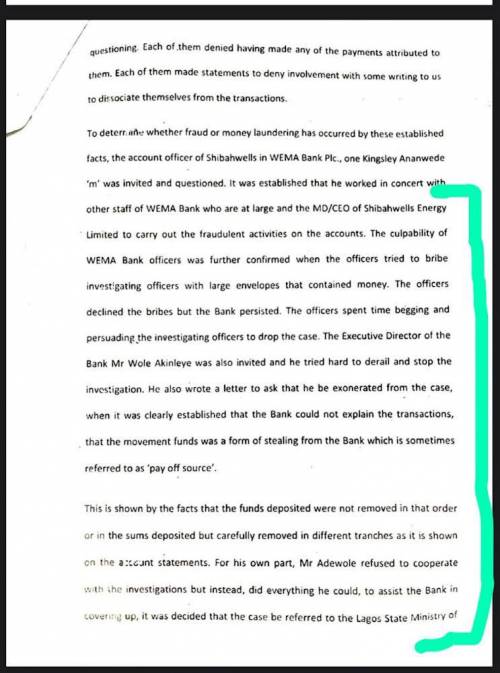 Meanwhile, the police has charged one Ojo Oladipupo, Chief Security Officer of Wema Bank Plc, to court for attempted bribery.

He was accused of offering a policeman, ASP Jonathan Egwemi (A/P No: 143699), monetary reward in order to stop him from carrying out a detail investigation into the fraudulent and money laundering activities of the bank.

“That you Ojo Oladipupo “M” and others now at large on the same date, time and place in the aforementioned magisterial district did intentionally attempt to offer the station officer A/P No: 143699 ASP Jonathan Egwemi monetary reward in order to reframe him from carrying out a detail investigation into the fraudulent and money laundering activities of your organization i.e WEMA Bank Nigeria Plc and thereby committed an offence contrary to and punishable under section 64 of the criminal laws of Lagos State of Nigeria,” one of the charges read. 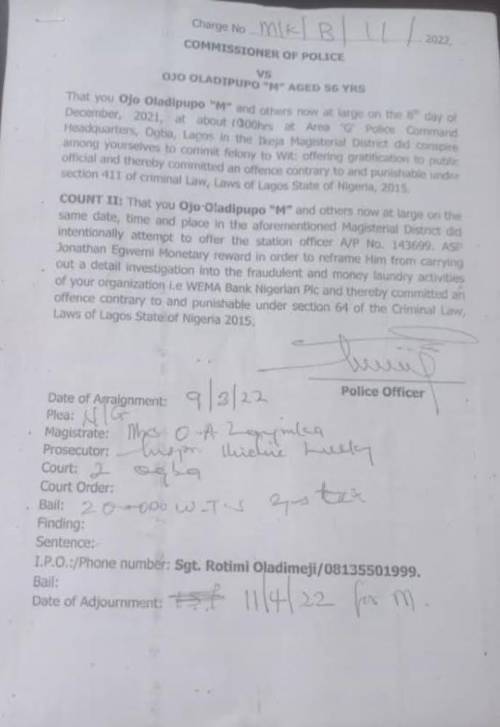 SaharaReporters had reported how N1.7billion were fraudulently moved to account number 0122367964, domiciled in the financial institution and operated by Adewole.

Multiple sources familiar with the fraud said Adewole, who is also the Managing Director of Shibawells Energy Limited, approached the bank in 2018 for a loan to boost his oil trading business using his neighbour’s assets as collateral.

Granting the loan to the pastor, the financial institution opened an account for him where the money was paid.

The account was, however, used to illegally move N1.7billion from the bank in 2021 to multiple accounts operated by top staff members and their proxies.

“He used his neighbour’s house for collateral of the loan which was granted to him and promised to return it within six months. But three years after, the man approached him for his house document, that was when he told him of the fraudulent act. He said the bank paid N1.7billion into the account using different multinational companies like Dana Airlines, Caverton Helicopter and two others, one N300million, one N270million, one N600million and like that, it’s only one of the transactions that they didn’t put a name there,” a policeman involved in the case had told SaharaReporters.

“So the pastor approached the bank instead of the police. The top management staff involved called him and asked him what he wanted, they now ended with an agreement that the bank would give him an extra loan of N1.5billion and he agreed. Remember I told you this man is the Managing Director of Shibawells Energy Limited, a company that does supply aviation fuel. So we realised it was well planned and the names of Dana, Caverton and others were intentionally used to cover up the fraud so people won’t notice. We also realised in our investigation that this money was given to the banks by the CBN and these top officials had to use an account to move it out and use it for something else.

“He has a partner, we called him and realised he wasn’t aware of the transaction. He was shocked, he realised the statement presented to him was forged to hide the fraudulent transaction.”

When contacted, a source at Dana Air said the airline didn’t do any transaction with Adewole nor his company, Shibawells Energy Limited.

“If I tell you we aren’t aware of this case, then I’m lying, the police some time ago invited us and we were surprised that the company’s name was used for such a fraudulent transaction. It will be wrong for me to share our bank statement with you but such a transaction wasn’t authorised by us,” a source at Dana Air told SaharaReporters.

“We weren’t involved in such a deal, only the bank management can tell you why they use Dana’s name for the transaction. Go to the bank tomorrow and send money to anyone and use Dana as the sender they won’t stop you from doing that. Jokes apart, if we have that kind of amount, my brother, we don’t have any problem,” the source added.

The group in a statement by Dahiru Mohammed, its Communications Director, alleged that Ademise had grossly abused his office as CEO of the bank and contravened several extant regulations of the CBN.

According to the group, Wema Bank, under Ademise’s watch, covered up a massive fraudulent scheme perpetrated by companies and proxies of the National Leader of the All Progressives Congress, Bola Tinubu.

Calling for his immediate removal, TNG said, “In doing this, Mr Ademise failed in his fiduciary duties and allowed a powerful politician to use Wema Bank as a clearing house for laundered funds.”

The group referred to a story dated November 23, 2020 by Peoples Gazette where bank records showed that Ocean Trust Limited, a company linked to Tinubu, shuffled billions of naira between its accounts with Wema Bank.

The newspaper documented the transaction between January and June 2019 on how Ocean Trust summarily moved N16.4billion from its operations accounts into a fixed deposit account all domiciled in Wema Bank.

This was after the court case involving Dayo Apara, a former Managing Director of Alpha Beta, a company partially owned by Tinubu.

Ocean Trust was specifically mentioned in Apara’s court documents as one of the firms allegedly used to siphon funds from Alpha-Beta, the controversial Lagos tax contractor.

According to the report, Alpha Beta has received billions of naira from the Lagos treasury since Tinubu was governor.

Apara claimed the firm received N150billion in the past 15 years from Lagos.