Popular actor and comedian, Okey Bakassi has urged Nigerians to get a PVC and vote for the candidate of their choice in the forthcoming 2023 Presidential elections.

Taking to his Instagram page, the stand-up comedian highlighted the many types of illiterate northerners who have PVC, as opposed to numerous university graduates and master’s degree holders who claim that their votes are meaningless.

People should quit making excuses that their vote doesn’t count, said Okey Bakassi, since if they don’t count, politicians won’t be paying or bribing the illiterate to vote for them.

“Almajiri has a PVC

Mai shayi has a PVC

Mai barrow has a PVC

Mai Debino has a PVC

Mai Gworo has a PVC

Onion and Tomato seller has a PVC

Shoe shinner has a PVC

Bus drivers/conductors has a PVC

motor park Agberos have has a PVC

You (a student or a graduate with BSC or MSC holder) with all your education and exposure still don’t have PVC. The worst thing is that you even try to justify why you don’t have one ‘My vote won’t count.

For the sake of those who paid your school fees and fed you through school, please don’t make your education /exposure useless with a statement like that. If voters don’t count, politicians won’t bribe/pay people to vote for them.

Go and get your PVC” 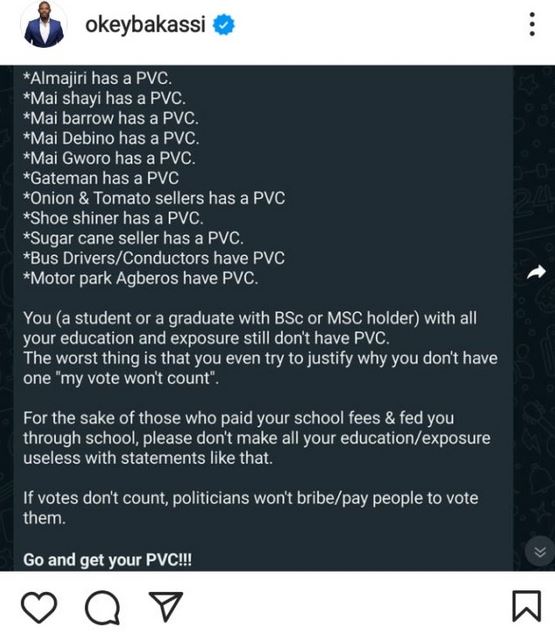