Though Olisema has long been linked to the reigning NPFL champions, the People’s Elephant only confirmed his signing on Sunday, as they continue to do business in what has been a very busy transfer window so far. 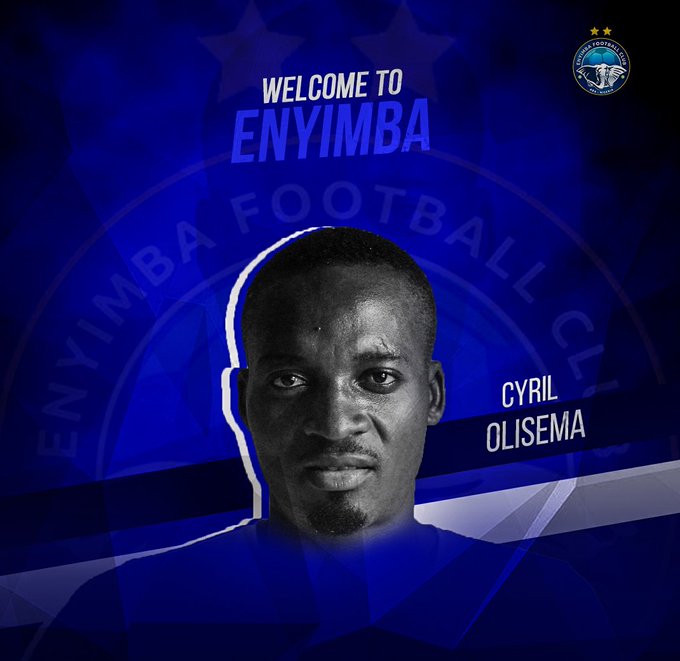 49 people are talking about this

The former @AkwaUnited_fc and @AlMasrySC player has arrived Enyimba having emerged the highest scoring midfielder in the NPFL last season with seven goals.

“Make room for the new #Elephant, Cyril Olisema, 💙” Enyimba wrote on their Twitter page after all loose ends were finally tied.

“The former @AkwaUnited_fc and @AlMasrySC player has arrived Enyimba having emerged the highest-scoring midfielder in the NPFL last season with seven goals.”

Having secured a record eighth NPFL title last season after winning the Championship play-offs in Lagos, Enyimba are working hard to build on that historic feat.

Coach Usman Abd’Allah’s men are also back to compete in the Caf Champions League after a four-year absence.

The duo of Austin Opara and Samson Obi have also joined the two-time African champions, from MFM and Abia Warriors respectively.

Enyimba will begin their quest in the 2019/20 Caf Champions League with a tie against Rahimo FC from Burkina Faso in the first round.

The first leg will be played in Burkina Faso on August 9, before the People’s Elephant return home for the reverse fixture two weeks later.

Should Sports Stars Be Forced into Media Obligations