Brazil coach Tite admitted Neymar’s performance in the 2-2 draw with Colombia surprised him as he revealed he has a “relationship of truth and loyalty” with the unsettled forward.

After a move from Paris Saint-Germain to Barcelona failed to materialise in the transfer window, fit-again Neymar played for the first time in three months in Brazil’s friendly at Hard Rock Stadium, Miami.

He made an impact 19 minutes into the game when his corner teed up Casemiro to give Brazil the lead and, though Colombia turned the game on its head with two goals in nine first-half minutes, Neymar side-footed an equaliser into the net after the break.

Tite said he considered substituting the 27-year-old but instead allowed him to play the full 90 minutes, having been impressed with Neymar’s display.

“I said, ‘I’ll take him off’ for the sake of physical preservation,” Tite told reporters after the game.

“But I saw that his physical responses were strong, intense, and coordinated. I could see him growing.

“As the end of the game approached, he produced more and more. He keeps his technique light and creates space. He was above my expectation.” 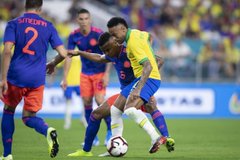 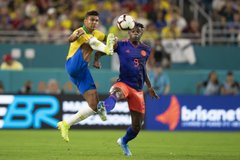 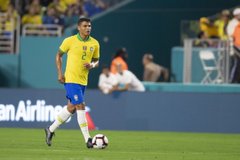 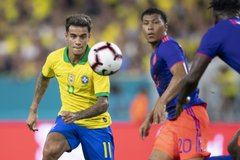 105 people are talking about this

PSG coach Thomas Tuchel has yet to include Neymar in any of his four matchday squads in Ligue 1 this season, but Tite gave a glowing assessment of the forward’s condition.

“We talked yesterday about monitoring the performance of Neymar from 45 minutes,” he said. “A player starts thinking and cannot perform [when fatigued]. But he was thinking and performing. It surprised me.”

After scoring Brazil’s second goal, Neymar wrapped his arms around the Brazil coach, who said the pair enjoy a strong working relationship at a time when the forward’s career is in a tumultuous phase.

“It is a reaction of true loyalty,” said Tite. “We have a relationship of truth and loyalty. We say what we think is right, what is wrong.

“It is a transparent relationship. I don’t analyse other facts, other situations. But I can say that we have a real relationship.”

Matteo Berrettini: Rafael Nadal defeat at US Open will teach me