August 15, 2022
Home Entertainment I Have Some Questions To Ask Funke Akindele When I Meet Her – Soso Soberekon
Entertainment Relationship

The music boss launched a question and answer session on his Instagram stories and subsequently got queried by fans and followers who asked why he hates the actress.

Talent artist manager and music exec, Soso Sobereko has responded to a follower who asked why he hates actress, Funke Akindele.

Recall that a few moments after the thespian’s estranged husband, JJC Skillz announced the end of their marriage, Soberekon took to social media to share a cryptic note where he urged men never to descend too low to ‘become a wife despite how hungry they may be’.

This advice at a moment like such was interpreted as a shade directed at Funke Akindele and JJC Skillz.

However, in a recent development, the music boss launched a question and answer session on his Instagram stories and subsequently got queried by fans and followers.

“Why do you hate Funke Akindele, so much?”

In response, he wrote:

“No I don’t hate Funke, but I have some questions to ask her when I meet her.”

See the screenshot below: 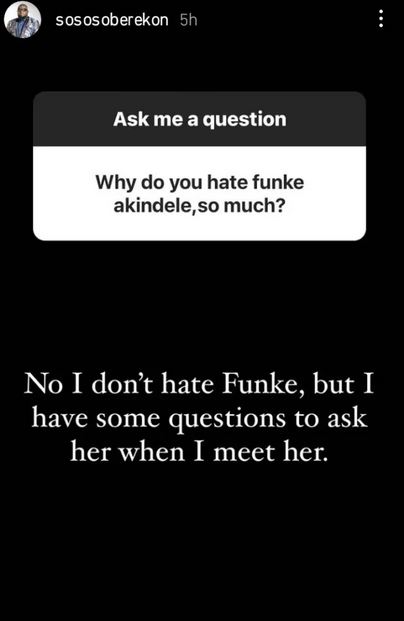