SHARE
For Sponsored Adv£rt, General Publicity, and Music or Skit Promotions at a discount rat£ DM or WhatsApp us at +2349050287348.
Mazi Nnamdi Kanu, the leader of the Indigenous People of Biafra, IPOB, on Sunday described the attack on the former Deputy Senate President, Senator Ike Ekweremadu, in Nuremberg Germany as a ‘courageous act’.

We had reported earlier that Senator Ekweremadu, who was attending the 2nd Annual Igbo Cultural Festival as a Speaker and special guest of honour at an event organised by the Ndi-Igbo Germany community, was beaten up and publicly humiliated by suspected IPOB members in a viral video.

Reacting in his official Twitter page, he said the attack is a polite warning.

He tweeted, “the courageous act by IPOB at Nürnberg Germany is a polite warning to those engaged in selling our collective interest to Fulani caliphate. Nwodo, Igbo governors are warned.” 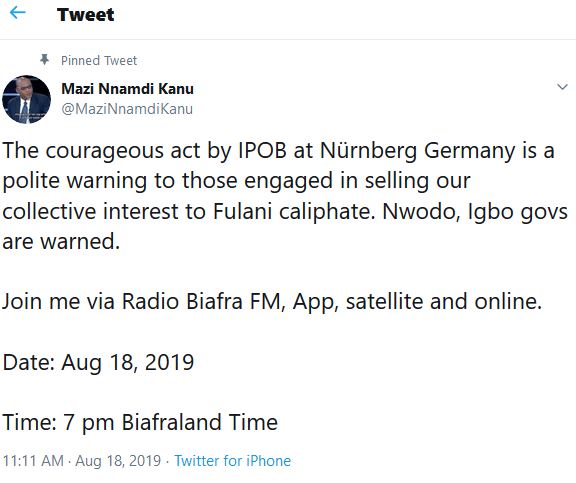