Nigerians have called out Prophet Odumeje following the death of comedienne, Ada Jesus.
Some social media users are demanding for his arrest.
They claimed that he threatened the woman and could be the reason behind her death.
The actress reportedly died in an Abuja hospital after suffering cardiac arrest on Tuesday night.
The comedienne was then rushed to the ICU where she was closely monitored by doctors.
The 22-year-old who marked her birthday yesterday, sadly, lost the battle on Wednesday, April 21.
Ada Jesus was admitted to the hospital after she developed kidney disease. When her health condition took a twist, she publicly sought forgiveness from those she had spoken against in the past.
See reactions: 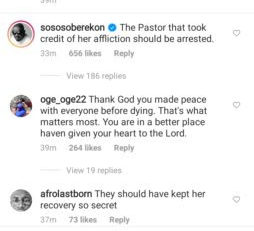 Why I Have Never Thought Of Reducing My Boobs – Actress, Ruth Eze

Why I Didn’t Feature Davido In New Album – Mayorkun