Nollywood actress, Chioma Ifemeludike has slammed Apostle Suleman to accept his wrongs and stop trying to act like a perfect being after Stephanie Otobo made fresh allegations against him.

She accused him of committing s3xual immorality and hooking up with girls old enough to be his daughters.

Yesterday May 9th, 2022, the clergyman made the headlines after a Canadian-based singer, Stephanie Otobo released some intimate pictures from their alleged romantic affair.

It can be recalled that years before Stephanie Otobo had once accused Apostle Suleman of sleeping with her, which the clergyman had denied being untrue.

Rekindling the allegations, the Canadian-based singer has claimed that they did have an affair, releasing some pictures to back up her claims.

Apostle Suleman reacting to this has stated he had Twitter about ending the ongoing ASUU strike and the next day, he’s trending on social media.

He also added that the lady keeps utilizing the same strategy all the time.

Reacting to the call out and Suleman’s continuous denials, actress Ifemeludike who had also confessed to sleeping with the same cleric for money blasted him for debunking the viral reports.

She wrote, “Joker!!! Oga No body is after you. If truly you are a man of God,All you have to do is accept your wrongs and stop trying to project yourself as a perfect human. You put that girl through a life and death situation and heaven will work against you if you don’t confess and seek the face of God. You claim to serve God and commit s3xual immorality like no man’s business, you hook up with young girls old enough to be your daughters, girls you should be bringing closer to God. There is something definitely strange about your behaviour and if we had a functional government you should be investigated thoroughly. Woe to you and everyone supporting and trying to cover up your evil including all they actors and actresses recruiting ignorant young girls for you.” 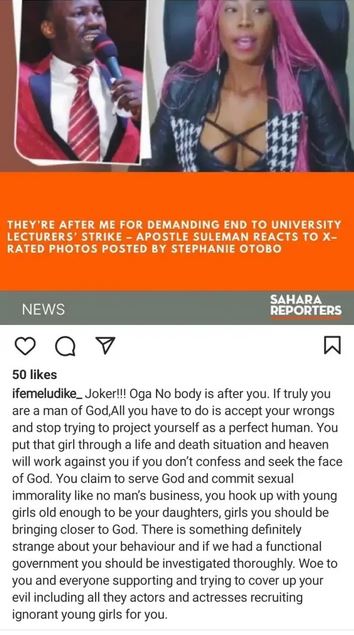