Pop star, Davido and public commentator, Kayode Ogundamisi have been embroiled in a war of words on Twitter over the video showing the arrest of two ladies, Susan and Helen, who had last week claimed that Davido had got one of them pregnant.

Reacting to the video of the arrest of the ladies, Ogundamisi had on Tuesday tweeted, “Imagine @iam_Davido as first Cousin in @StateofOsun with his Uncle @IsiakaAdeleke1 as Governor. And @MBuhari is meant to be the tyrant o!” 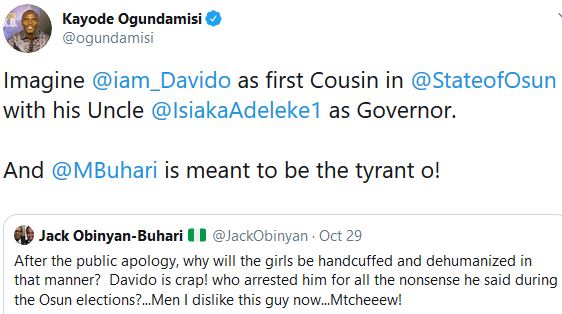 In response, Davido bashed Ogundamisi and asked him to keep his family’s name out of his lips. Davido quoted Ogundamisi’s tweet and wrote, “It pains you that someone half your age that you can give birth to is greater than you. Now keep my family name out (of) your mouth! Your whole life earnings no reach 30 per cent of my show money and it hurts I know.” 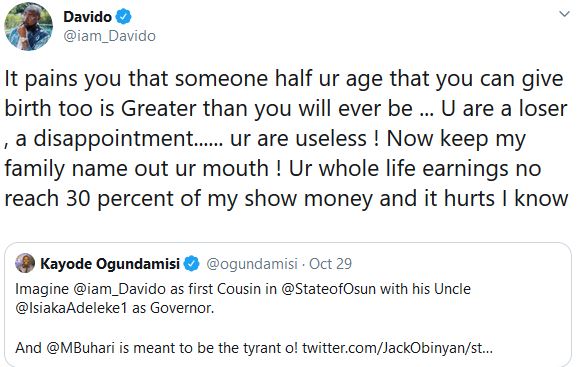 In the video, the two ladies were seen handcuffed to each other and trying to hide their faces, even as Davido’s hypeman, Spesh, threatened to slap one of them and also listed the allegations against the ladies.

The Lagos police on Tuesday had condemned the ‘parade’ of the ladies, saying it was wrong for a citizen to parade a fellow citizen. He added that the ladies could sue Davido and Spesh over the ‘parade.’

It would be recalled that in 2018, Davido’s uncle, Senator Ademola Adeleke had contested for the office of the governor of Osun State on the platform of the Peoples Democratic Party. He lost to Governor Gboyega Oyetola of the All Progressives Congress.

Trump Shares Fake Photo Of Hero Dog Getting A Medal