Slimcase, the Nigeria artiste known for his street-inclined music has fallen out with his many fans after making some comments.

Trouble started when Slimcase posted about the death of George Floyd, the black American man killed by a white police officer. Slimcase declared that Floyd is the sacrifice for change in black history

In his reply, Slimcase insinuated that Tina’s case is local and that he is more concerned with international matters. 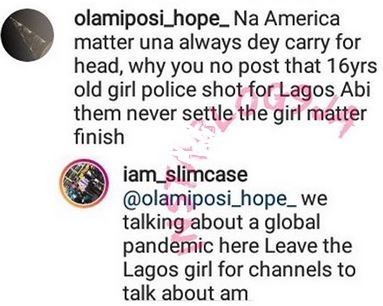 However, his reply has attracted a lot of backlash from fans who attacked him for making such an insensitive comments especially during this period where Nigerians are rallying for justice to be served Tina.

Tonto Dikeh and 2face’s babymama, Pero Adeniyi hang out together in Abuja (Photos)

How I Married The Wrong Man At Right Time – Actress,...

BOBOJAYTV - March 15, 2020 0
Beautiful and talented actress, Monalisa Chinda has been dominating the movie scene ever since her debut in Pregnant Virgin. Having experienced a bad marriage to...