Investigative journalist and blogger, Kemi Olunloyo has slammed human rights lawyer, Femi Falana following the petition against her for the reckless statement she made regarding the unfortunate death of a 12-year-old Dowen college student, Sylvester Oromoni.

Recall that Kemi Olunloyo in a chat last week had claimed that the deceased minor (Sylvester Oromoni) died during a cult initiation process he willingly gave consent to.

Kemi’s claims had contradicted initial reports on how the 12-year-old student of Dowen College died.

To this end, reports said Sylvester’s family was angry over the allegation against their late son by the journalist and had filed a petition against her through Femi Falana.

In what appears to be a stage of defense, Kemi Olunloyo took to her Twitter handle to question the petition against her as she threw a shade at Falana, asking him if he could petition the police to invite the mainstream media.

She wrote, “Dear Mr Falana, we have no petition signed by you asking the police to invite me for questioning. Pls stop lying to the public. No US human rights lawyer petitions the police to question a journalist. Journalists protect the source. I cannot mention names and will plead the 5th.

“Inviting me will seriously DAMAGE Sylvester Oromoni’s case. I’m an independent journalist. Get that into your head, Falana. Let the cops do their investigation and I do mine. Can you petition the police to invite BBC or CNN? Your ignorance does not excuse stupidity. Serve us petition.” 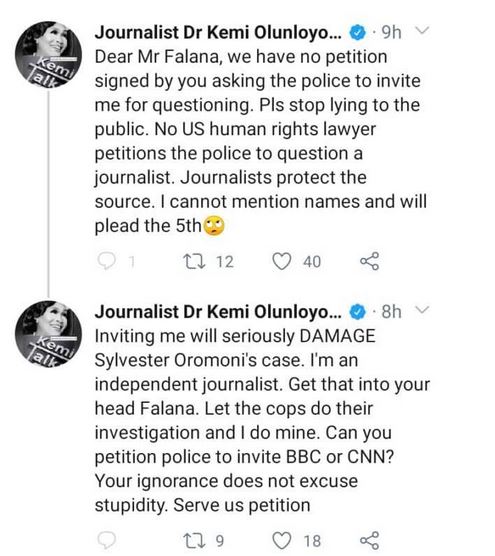 According to Kemi, she would plead the 5th if such a petition visits her.

Meanwhile, it is noteworthy that pleading the 5th means she would refuse to answer any question by the police on the grounds that she might incriminate herself: a law contained in the Fifth Amendment to the U.S. Constitution which guarantees that an individual cannot be compelled by the government to provide incriminating information about herself.

The Airline Operators of Nigeria (AON) has advised that, as an apex aviation regulatory bo…