July 03, 2022
Home Nigeria Tinubu Was Betrayed By His Lieutenants Like Osibanjo, Ministers and Governors From Southwest

Tinubu Was Betrayed By His Lieutenants Like Osibanjo, Ministers and Governors From Southwest

Former presidential aspirant of the All Progressives Congress, Adamu Garba has revealed those who betrayed Bola Tinubu.
According to him, President Muhammadu Buhari is not among Tinubu’s betrayers.
Recall that the former Governor of Lagos state had alleged that he made Buhari while addressing delegates of the party in Ogun state.
Tinubu in his speech had insisted that it is his turn to become President, while also bragging about making Muhammadu Buhari President and Dapo Abiodun, Governor of Ogun state.
Reacting to controversy and speculation of the former Lagos state Governor allegedly being sidelined in the forthcoming primaries of the ruling party, Adamu claimed that Tinubu has been betrayed, not by Buhari, but his (Tinubu) lieutenants like Vice President Yemi Osibanjo, Ministers, Governors from the Southwest and many others.
He tweeted;
“Quite alright Tinubu is betrayed, not by Buhari but by his lieutenants like Osibanjo, Ministers, Governors from the Southwest, etc. Look at his surroundings, you’ll find Kashim, Abu Ibrahim, Ganduje, Kashim-Imam, Aminu Suleman etc. Where are his beneficiaries? I hate betrayal!” 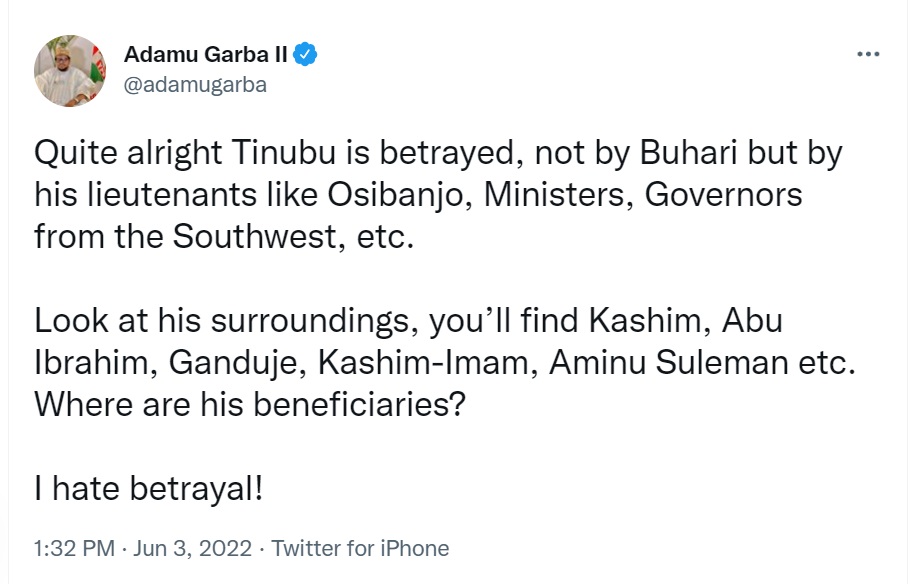 Why I Rode Tricycle Around Abeokuta – Obasanjo