May 21, 2022
Volodymyr Zelensky, Anthony Blinken and Lloyd Austin
Home Foreign US Secretary of State Anthony Blinken And Defence Chief Lloyd Austin Meet With President Zelenskyy in Ukraine
The President of Ukraine, Volodymyr Zelensky has welcomed U.S. Secretary of State, Anthony Blinken and Defence Secretary, Lloyd Austin to his country.
The two top US officials paid a secrecy-shrouded visit to Kyiv, Ukriane’s capital on Sunday, April 24
Zelenskyy had announced Saturday that he would meet with the U.S. officials in Kyiv on Sunday, but the Biden administration refused to confirm that and declined to discuss details of a possible visit even though planning had been underway for more than a week.
In video of the meeting released on Monday, by Zelenskyy’s office, Blinken praises the Ukrainian leader for the “extraordinary courage and leadership and success that you’ve had in pushing back this horrific Russian aggression.”
“We got used to seeing you on video around the world, but it’s great, it’s good to see you in person,” Blinken says with a smile.
Blinken also said U.S. diplomats returning to Ukraine likely would restaff the consulate in Lviv, in western Ukraine, before returning to the capital.
Journalists who traveled with Austin and Blinken to Poland were barred from reporting on the trip until it ended. They weren’t allowed to accompany them on their train journey into Ukraine citing security concerns.
The trip by Blinken and Defense Secretary Lloyd Austin was the highest-level American visit to Ukraine’s capital since Russia invaded in late February.
Blinken said Russia is failing in its war aims and “Ukraine is succeeding.”
The top officials from Washington told Ukrainian President Volodomyr Zelenskyy and his advisers that the U.S. would provide more than $300 million in foreign military financing, and had already approved a $165 million sale of ammunition.
“We had an opportunity to demonstrate directly our strong ongoing support for the Ukrainian government and the Ukrainian people. This was, in our judgment, an important moment to be there to have face-to-face conversations in detail,” Blinken told reporters Monday near the Polish-Ukrainian border, after returning from Kyiv.
Austin said Zelenskyy’s response to the aid was deep appreciation for what was being given, but “he has the mindset that they want to win and we have the mindset that we want to help them win.”
Lloyd said victory, from the U.S. perspective, would include seeing Russia “weakened” militarily.
Austin addrd at the news conference that “the world has been inspired” by Ukraine during the war, and that America would continue its support.
“What you’ve done in repelling the Russians in the battle of Kyiv is extraordinary,” he said. 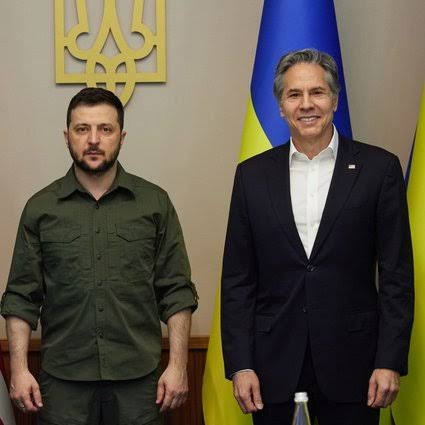 Kyiv: Russian troops pushed back to the border