President Muhammadu Buhari and his South African counterpart, Cyril Ramaphosa, have agreed to set up a committee to address the issue compensation to victims of xenophobic attacks in South Africa, it was learnt on Thursday.

It was also gathered that South Africa was yet to agree to Nigeria’s request for payment of compensation to victims of xenophobic attacks.

One of Nigeria’s position was that compensation must be paid to victims of the violent attacks as part of the measures to stem the incessant attacks on foreign nationals by South African youths.

Though the issue of compensation was not mentioned in the joint communique issued at the end of the meeting between both presidents, it was however learnt that President Buhari raised the issue and it was agreed that a committee be set up to address it.

According to a reliable source who was part of government delegation to South Africa, the issue of compensation was raised by Nigeria “but both countries agreed to set up a committee to address it.”

“So for now, there is no agreement on that,” the source said.

In the communique, both leaders condemned the violent incidents and the destruction of property and reiterated their call for heightened law enforcement.

They also stressed the importance of high-level engagements on the unfortunate phenomenon as demonstrated by the reciprocal dispatch of Special Envoys by both countries.

Besides, the two Presidents further endorsed the reestablishment of the Republic of South Africa and the Federal Republic of Nigeria consular Forum to meet twice a year.

President Buhari who arrived South Africa on Wednesday was at the Nelson Mandela country on the invitation of President Ramaphosa.

He also attended the inaugural session of the elevated Bi-National Commission (BNC), as part of continuing bilateral engagements aimed at strengthening and deepening cooperation between South Africa and Nigeria.

He was accompanied to the meeting by a high-level delegation comprising State Governors, Ministers, and Senior Government Officials.

The communique also stated that the two Heads of State reviewed a wide range of bilateral, continental and global issues of common interest.

They acknowledged the historical and strategic relations that exist between the two countries, and the need to further strengthen the ties of friendship and cooperation.

The communique which was made available to Diplomatic Correspondents in Abuja reads in part: “President Ramaphosa used the opportunity of the meeting to brief President Buhari on the recent incidents of violence in South Africa affecting foreign nationals. He also alluded to the fact that these unfortunate incidents are not consistent with the values and principles underpinning South Africa’s constitutional democracy.

“President Ramaphosa also dispelled the notion that incidents of violence affecting foreign nationals were targeted at Nigerian nationals, as other foreign nationals and indeed South Africans were affected as well. The President assured his counterpart that the South African Government was fully in control of the situation and several interventions including engagements with diplomatic community and émigré communities, security operations, policy and legislation reviews were underway.

“Both Presidents strongly condemned the attacks against foreign nationals including Nigerians in South Africa and the reprisal actions against South Africans and their interests in Nigeria. They expressed strong commitment to take all necessary measures to stop a recurrence of these attacks which they said undermine the vision of a strong and prosperous Africa that the two countries have for the continent.

“President Ramaphosa further contended that South Africa is an integral part of the African continent and, in this context advocates for a peaceful, vibrant and sustainable Africa, and that as Africans, we all have a shared commitment to foster peace and greater continental unity. He further stated that we should never forget that our fellow Africans have contributed to developing our economy, and that of the region and similarly South Africans are helping to develop economies across the continent.

“Both Presidents condemned these violent incidents and the destruction of property and reiterated their call for heightened law enforcement. They stressed the importance of high level engagements on this unfortunate phenomenon as demonstrated by the reciprocal dispatch of Special Envoys by both countries. In this regard, the two Presidents endorsed the establishment of an Early Warning Mechanism and directed the two Foreign Ministers to give practical expression to the Early Warning Mechanism to be used as a preventative and monitoring platform.”

On the current relationship between both countries, the communique stated that the two president were satisfied with the continued exchange of high level visits and meetings between both countries. They also appreciated the level of bilateral cooperations while also welcoming efforts to increase trade volume.

It stated, “The two Presidents noted with satisfaction the continued exchange of high level visits and meetings between the two countries. In this regard, they recalled the successful working visit of President Ramaphosa to Nigeria in July 2018, during which the two Heads of State reaffirmed their collective desire and commitment to enhance political, economic and social relations between the two countries.

“The two Presidents appreciated the vast nature of the two countries’ bilateral cooperation which covers, amongst others; Trade and Investment, Energy, Mining, Defence and Security issues, Justice, Police, Immigration, Tourism, Environment, Education, transport as well as Science and Technology. In this regard, the two Presidents took note of the thirty two (32) signed Agreements and Memoranda of Understanding (MoUs), and committed themselves to ensuring that those which are in force are fully implemented while those which are not yet in force are to be revived for implementation.

“Both Presidents noted with great satisfaction the economic cooperation between the two Republics and welcomed the steps to increase trade volumes as well as private sector investments. They welcomed the important role of the Business Forum, which took place on the margins of the State Visit. The two leaders further welcomed the decision to establish a Joint Ministerial Advisory Council on Industry, Trade and Investment. The inaugural meeting of the Council would be held not later than April 2020, in Abuja. The Council is expected to serve as a critical vehicle in facilitating and promoting private sector participation in the economies of both countries.

“Both leaders took note of the significant footprint of South African businesses operating in Nigeria in sectors such as telecommunications, mining, aviation, banking and finance, retail, property, entertainment and fast foods industries. They also noted and welcomed the business activities of Nigeria’s small, micro and medium enterprises, as well as the investment of Dangote Sephaku Cement in South Africa.

President @MBuhari in South Africa condemns in the strongest terms the attack on Nigerians and other Africans in the country, and calls for implementation of measures meant for the prevention of such a reoccurrence. #PMBInSA 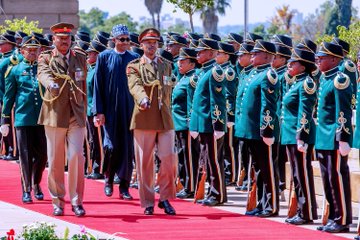 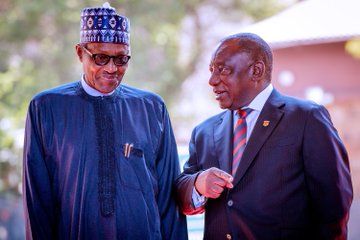 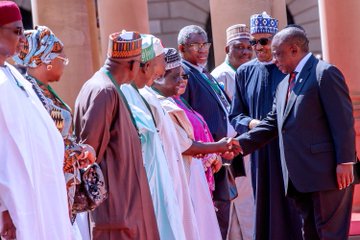 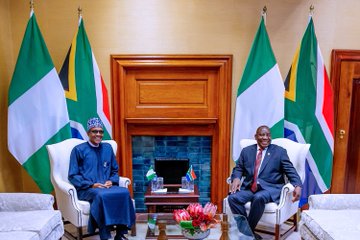 247 people are talking about this

“At the Continental level, the two Presidents exchanged views on the current political, economic and security situation in their respective regions. They also expressed their grave concern on the ongoing instability in some of the countries on the Continent and strongly condemned the continued terrorist and extremist activities.

”Both leaders reaffirmed their commitment to working together in pursuit of sustainable peace and economic development on the continent in the context of AU Agenda 2063 and the African Continental Free Trade Area Agreement (AfCFTA).”

The two Presidents also “reaffirmed the strategic relations that exist between the two sister Republics and committed themselves to working together to further enhance close political, economic and social cooperation in the interest of their people and the continent.

“President Buhari on his part expressed profound gratitude for the warm reception and hospitality accorded to him and his delegation. He also took the opportunity to invite President Ramaphosa to pay a reciprocal visit to the Federal Republic of Nigeria on a date to be jointly agreed and communicated through diplomatic channels.”

We are ready to resume nationwide CVR on June 28 — INEC